“Towards Odin Teatret” Master Class was closed successfully on May 22nd, which was the 2013 import program of “The Master’s Practice and Theory” organized by the Experimental Teaching Studio of International Performing Arts in STA. The Master Class lasted for 15 days, including the speech by Eugenio Barba, the founder of the Odin Teatret, and the training show “Thinking in Action”, film show “Conquer the Difference”, keynote speech by Nicola Savarese, acting workshop by the excellent actor Tag Larson, Jan Ferslev, Roberta Carreri, 5 acting shows and watching Inside the Skeleton of the Whale which was shown in Wuzhen Drama Festival. The acting workshop consisted of national class and acting bachelor class. The forum and the commencement were held on May 22.

In the forum, Professor He Yan, who is the chief of the International Experimental Teaching of Acting Workshop, raised requirements. Most students of the national class are acting teachers from art colleges all over the country. Hopefully, teachers will spread those excellent theater concepts. Hopefully, all teachers will bring the sacred atmosphere back to their own college to form a peaceful and tidy training environment and protect the cleanliness of the art. All students should follow the advice from Ms Roberta in her last class: the content from this class should be taken into your own concept system and training method, and be brave to allow students to show their personality.

Pierangelo Pompa, the assistant of Eugenio Barba appreciated the invitation of the academy and looked forward to further cooperation between Odin Teatret and STA. Li Li, Chief of the Figure Education Office in Acting Department in STA, admired Ms Roberta’s keen attitude towards theater art and her perfectness of the figure, voice and language.

All students were greatly enlightened by this master class. Han Yue, an acting teacher from Chinese Media University and a film director herself, was deeply moved by Ms Roberta's fantastic performance. According to her, a good actor should gain attention from director, and give performance anytime anywhere, convey information and tell a story from different perspectives. An actor should be able to control himself/herself quickly, mentally and physically to generate precise performance. In past few days, she witnessed Roberta's diligence and preciseness of body control, which touched her a lot. She felt as if she were fulfilled with energy here. 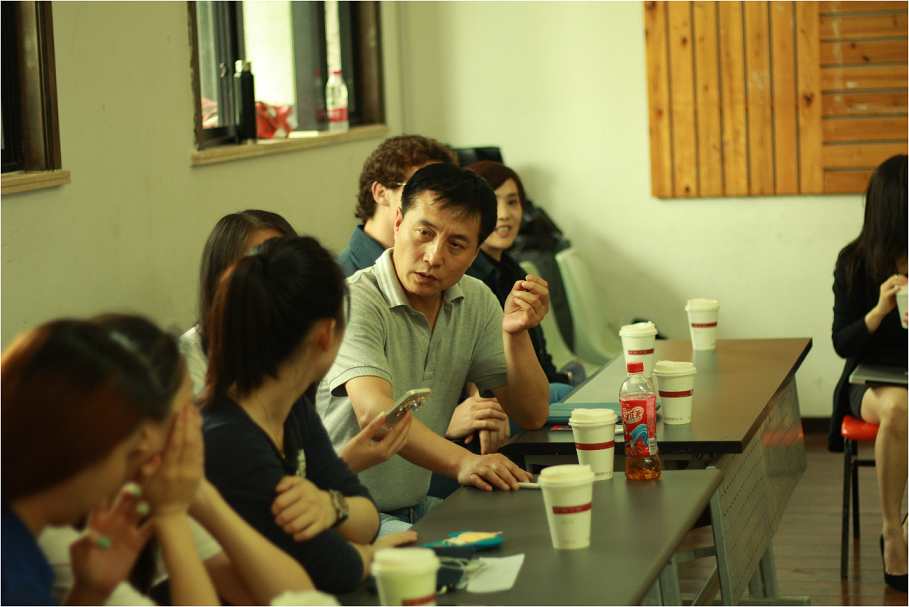 Cao Peixi got master degree from Cheung Kong Graduate School of Business, and she is the alumnus of the Acting Department of STA. It's the first time she returned to acting after over 20 years’ departure. In this training, she understood that more potential meaning in lines would be found if you dig more from the perspective of the body gesture. She really admired teachers' training in imagination, eloquence of body and vocal language, preciseness, which would be of great help for her business. Meanwhile, for the first time to drop mobile phone in class and cut off the busy world outside, it is an amazing experience to acquire new knowledge with pure mind.

Ma Ling is an acting teacher from Art Department of Guizhou University. What impressed her most were the four words Ms Roberta used to describe the theater essence: eyes, action, continue, come. She concluded that workshop these days taught her to distinguish habitual moves in life from action in acting so that she wouldn’t confuse acting with life. She would love to consistently explore more theatre possibility. 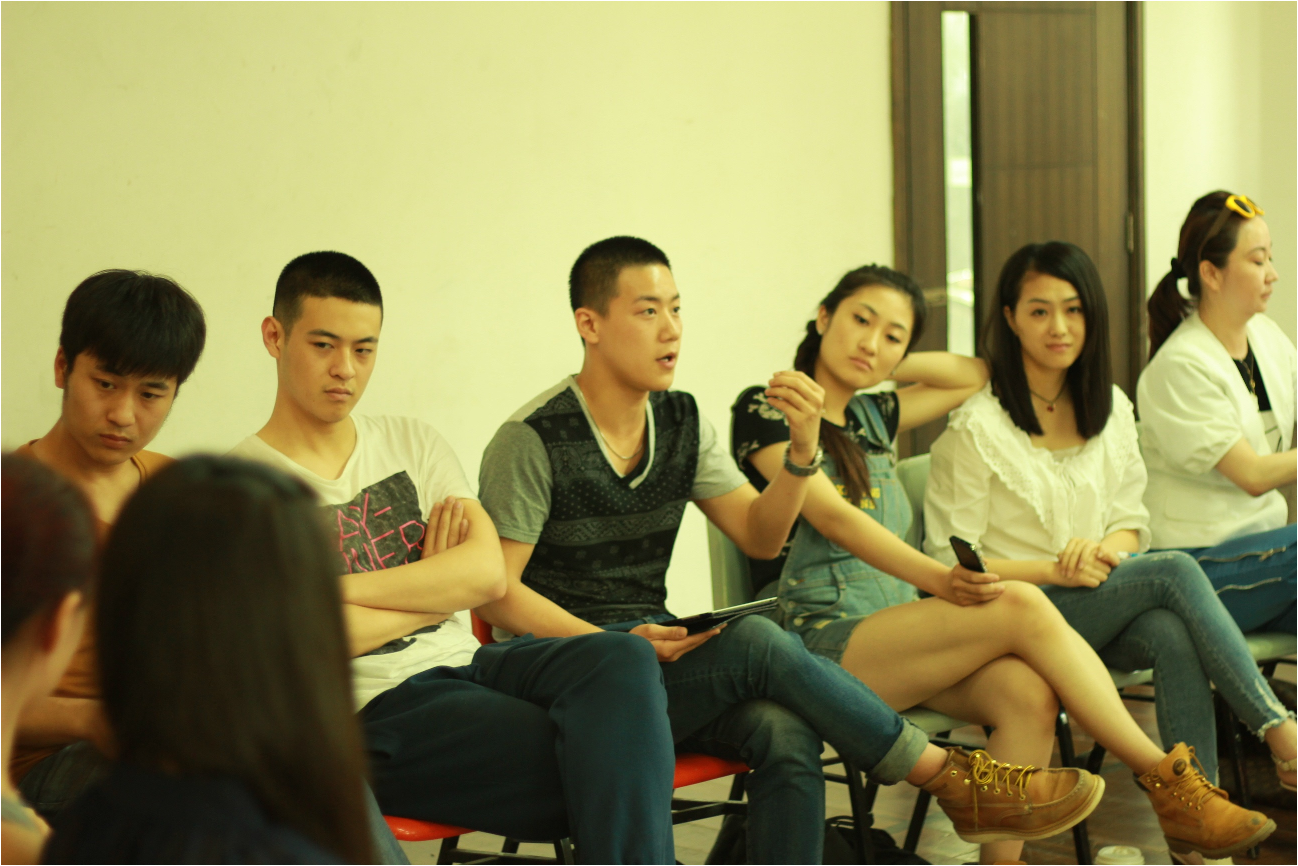 Acting teacher Zhao Xiaochen from Jilin Animation College felt that his motion and body were both enlightened in past few days' class, which triggered great creation urge. He was deeply moved by Ms Roberta's spirit that she acted within her life. He concluded, "She hides nature in muscle, buries belief in eyes, conserves strength in back, blows voice in air, merges feelings in details, puts ideas in props, shoots performance in hearts, spreads persistence in ages."

Chen Gong from Acting Department of Hunan University talked about the experience that he applied for the master class. When he asked He Yan and Fan Yisong for advice about this class, both of them strongly suggested that he should come for it would be a life-changing experience and would change his teaching and concepts he passed to students. He got epiphany when Ms Roberta clearly separated move, action and behavior. Action is a purposeful move. He hoped the bachelor class could learn the skill and the ability to get skillful and insist. 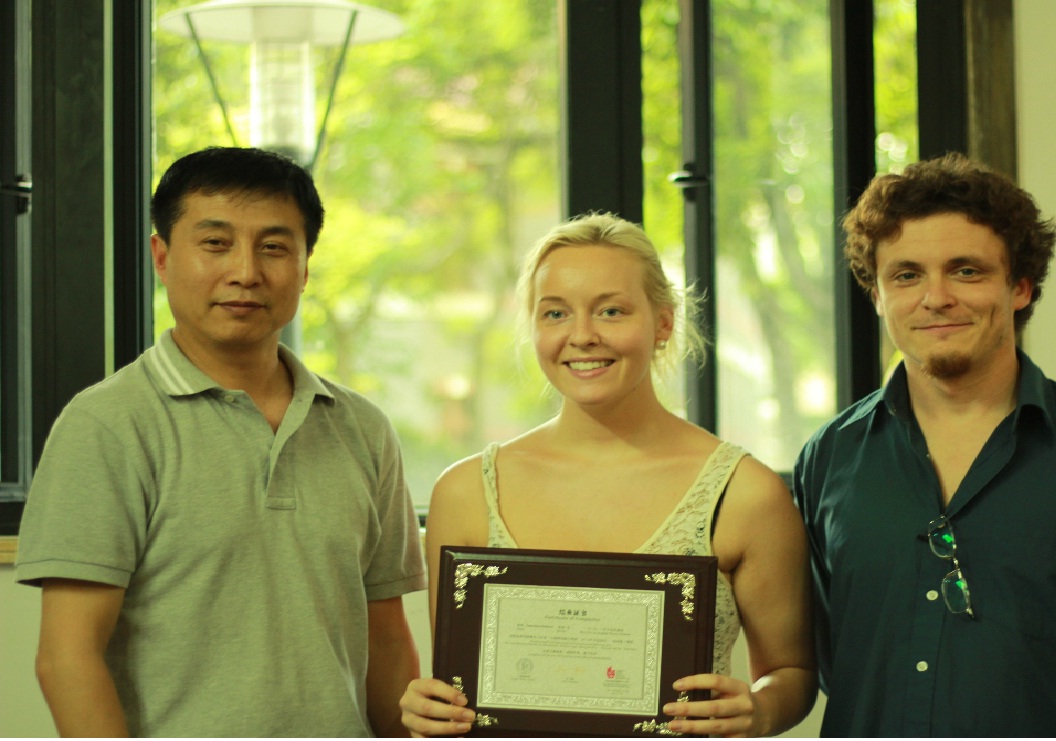 For Wei Liang, figure teacher from Tongji University, "headache" is the most direct feeling about the training in last few days, because of so many questions raised. How to construct your own concept system of education? What's the relation between spontaneous training and routine? How to find a training way suitable for individual characteristics in Chinese culture? Why do we live? What do we need for our heart? Should we be persistent or assimilated? All above will be left for further consideration
Huang Bin, acting teacher from Dance College of Sichuan Normal University, felt that the training in workshop broke the normal thinking set. Here you can combine your body with your mind, and react according to the true feelings of the body. He had special feelings about the requirements in the master class, such as the cleaning of the floor before class, no phoning or texting in the classroom and a tidy and quite training environment. He said even his students felt touched when they saw the picture he posted on Weibo that he and other students were cleaning the floor before training. He intended to bring this good habit back to his university and to help his students to feel the sacred art class.

Chen Wencong, graduated from Drama and Film Department in Emory University, shared many questions and confusion. How to balance acting and life? Why theatre？What kind of theatre art should we do? Which kind of life should we have? How do you like people to evaluate you after death? He shared an episode about Peter Brook regarding to the relation between artistic creation and real life. Brook postponed the performance and changed leading actors for a young actor who suffered from a car crash during rehearsal period, yet no one was sure when this young actor could regain his voice. However, Brook's confidence and encouragement speeded his recovery and saved his art life. He also admires the broad knowledge the actors from Odin Teatret own: painting, sculpture, music, poem, etc. They absorb nutrition from all above to maintain flame of creation in their hearts.

Yu Yadong from Zhejiang Media College shared his confusions and setbacks in teaching. How to teach acting when many students do not like art? How to learn? He was thinking about it. Before he came to the master class, he felt the enthusiasm on drama was decreasing. So he came for relightening the flame. Moved by the brilliant artists and teachers from Odin Teatret, he hopes he will carry on.

Meng Jing, acting teacher from Guangxi Art College, shared three key words: communication, persistence, improvement. Odin Teatret enlightened her to communicate with language, bodily and vocally, cross-culturally and cross-regionally. She was also touched by her classmate Chengong with the example how he came over numerous difficulties to go to college and held the dream of art education forever. The constant pursuing of the teachers from Odin Teatret was a great encouragement for her. A sit-in student Tong Tong who graduated from Media Department of New York University in America concluded the training as the multi-functions of the actors, how actors broke their limits to explore new acting mode and to surprise audience. She also admired the persistence and enthusiasm of the actors.

Emma graduated from Educational Drama Department in Universitetet i Bergen, Norway. She was impressed by the teaching method of Ms Roberta with less talking and more acting. For students from different countries and various cultural backgrounds, communicating with eyes and body language, they perfectly showed the statement "acting thinking". She realized that instead of answers in this master class, you would get method and experience to stimulate your ideas. She would love to communicate with body language in future trainings for companies, to get students into action purposefully instead of just moving.

Post doctor Shi Yuanyuan from Central Theater Academy studies Independence Drama in China. She introduced a lot of independent drama workers who were in the experiment of trying the acting style of different western schools. And she hoped the education of theater academy can be more open. Following the system of Stanislavski, we should add more international acting schools into the teaching. She said in order to learn acting one should learn philosophy, criticism, neuroscience, body social science, etc. Only in this way, can one break the limit of his thinking.

The master class brings a lot of inspiration and enlightenment for all students, who appreciate the hard working of deputy professor He Yan in the planning of the activity "walking to Odin Teatret " that offers a great opportunity to get close enough to a different acting method for STA and other theater colleges. All students also thank for the contributions of the International Experimental Teaching of Acting Workshop, who organized such a memorable trip for body and mind.