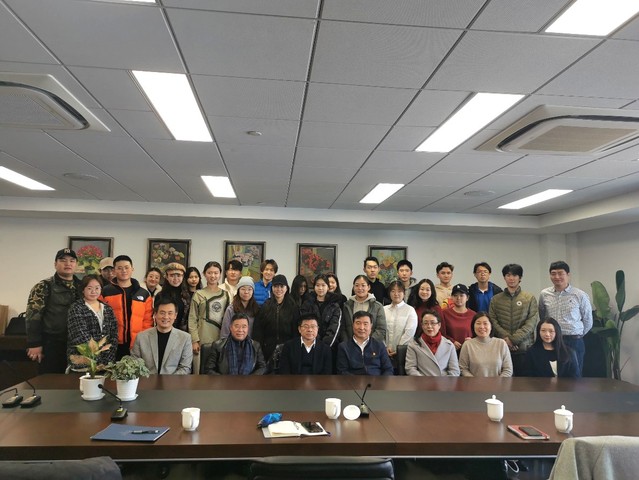 The meeting was presided over by Erqisi. At the meeting, Li Zhenlin put forward higher requirements for students' study, and said that the college will do its best to provide the best teachers and opportunities for them, hoping that students can produce works and, especially, high-quality works in the future. Han Yongsheng commented on the performance of the students of the Inner Mongolia Preparatory Class 2020 since the beginning of the semester, and introduced a series of training programs adopted by the CPC Committee of the university according to the specific situation of the students in the class. Wang Chunyun affirmed and praised the excellent performance of the students in a series of major activities of the university. Luo Xin’er reported the state of class atmosphere and study atmosphere of the class. After that, Wuyungerile brought greetings from hometown to the students. Wuenqi delivered a speech, in which he highly recognized the key role played by STA in the cultivation of film talents for Inner Mongolia. Taking Ning Cai, Tu Men and other STA alumni as examples, he encouraged the students to forge ahead. He also stressed that the students should love the party, love the country, love Shanghai and love the university, and that they should take full advantage of the top-level art training in the new era, study hard and cherish the opportunities, so as to be able to enrich the literary front of their hometown in the future. At the end of the meeting, Huang Changyong, President of the Shanghai Theatre Academy made a concluding speech and had in-depth exchanges with Deputy Director-General Wuenqi on further cooperation between the two sides and future enrollment plans. After taking the group photo, the meeting was successfully concluded in a cordial and warm atmosphere.