On the evening of 12 November, “Military Song”, the large-scale original drama created by the Shanghai Theatre Academy (STA), made a wonderful performance at the 4th China (Qianjiang) Cao Yu Cultural Week. Shen Donghui, Chairman of the CPPCC Qianjiang Municipal Committee , relevant leaders of the municipal CPC committee and municipal government, and heads of relevant government departments attended the performance and took a group photo with the actors and staff members of “Military Song”. 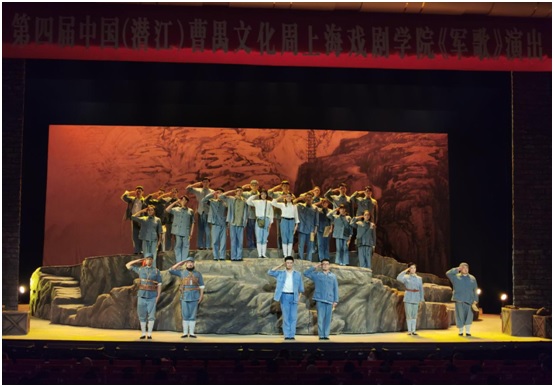 2020 marks the 110th anniversary of the birth of Mr Cao Yu, the drama master. Qianjiang , as the hometown of Mr Cao Yu, hereby held the 4th China (Qianjiang) Cao Yu Cultural. This year’s Cao Yu Cultural Week was hosted by the China Federation of Literary and Artistic Circles and the Hubei Provincial People's Government, organized by the China Theatre Association, the Hubei Provincial Department of Culture and Tourism, Hubei Federation of Literary and Artistic Circles, the TianjinFederation of Literary and Artistic Circles and the Qianjiang Municipal People's Government, and co-organized by our university together with the Chinese Society of DramaTheory and History, the Central Academy of Drama, the Beijing People's Art Theatre and the Tianjin People's Art Theater and so on. Xie Wei, Secretary of the CPC Committee of our university, attended the opening ceremony of the Cao Yu Cultural Week and signed a strategic cooperation agreement with Qianjiang Municipal People's Government on behalf of the Shanghai Theatre Academy on 8 November. As one of the co-organizers of the 4th China (Qianjiang) Cao Yu Cultural Week, the Shanghai Theatre Academy was invited to bring its the large scale original drama “Military Song” for two performances at the Qianjiang Theatre on 12 and 13 November consecutively. 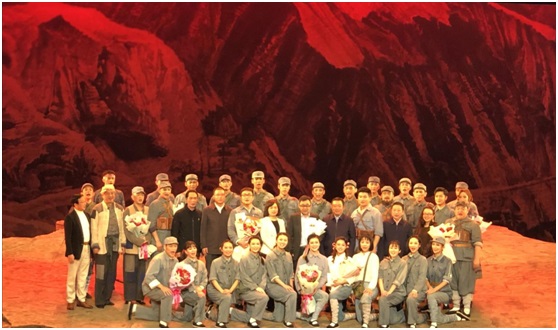 Shen Donghui, Chairman of the CPPCC Qianjiang Municipal Committee, delivered a speech after the first performance on 12 November. On behalf of the people of Qianjiang, he welcomed and thanked the teachers and students of the Shanghai Theatre Academy for coming to Qianjiang to perform "Military Song", which brought a wonderful cultural feast to the people of Qianjiang. 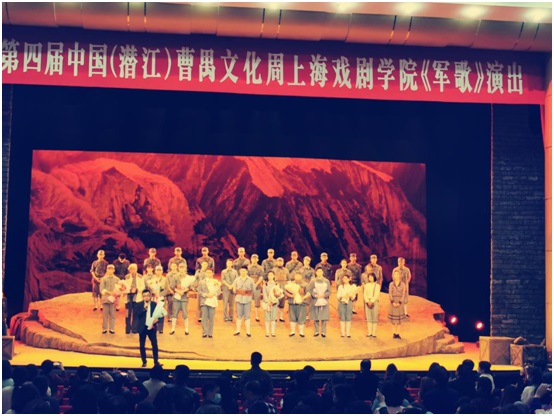 Professor Lu Ang, the chief director of “Military Song”, said that Qianjiang is the hometown of Cao Yu, the prominent Chinese dramatist, andit is of great significance that our teachers and students from the Shanghai Theatre Academy are able to come to perform“Military Song” in this home of drama .