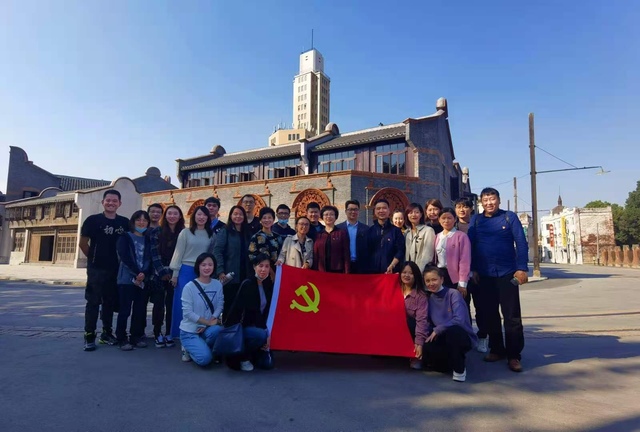 On 6 November, led by Zhang Jiachun, Member of the Standing Committee of the CPC Committee and Chief Accountant of our university, all Party members of the CPC Branch of the Continuing Education College and the CPC Branch No.6 of Functional Offices and teachers of the key offices went to the Shanghai Chedun Film and Television Base for a joint Party Day theme activity. The relevant teachers in charge from the Organization Department, Student Work Department, CPC General Branch of Students and Acting Department were also invited to join this Party Day theme activity.

Located in Songjiang District, the Shanghai Chedun Film and Television Base is one of the top ten film and television bases in China. It is mainly composed of a cluster of imitated ancient buildings in the period of the Republic of China. The tour guide gave a vivid explanation about the history of Shanghai during the Republic of China period and the connection between the Chedun Film and Television Base and the development history of film in Shanghai. During the visit, the teachers shared with great interest the people, stories and historical events they knew about, while listening to the tour guide’s introduction about the history of Shanghai, the development history of film in Shanghai and the behind-the-scene stories of film and TV series shooting that had been carried by those buildings in the filming scenes .

Subsequently, the two sides held in-depth discussion about exchange and cooperation. Before the discussion, Xie Wei, Secretary of the CPC Committee of our university, specially came to the Chedun Film and Television Base to meet with Wang Jian’er, Chairman of the Shanghai Film Group, and met with the teachers attending the Party Day theme activity together with the latter. The two leaders had an in-depth and forward-looking discussion on the further university-enterprise cooperation, and set the direction for the concrete implementation of cooperation projects.

At the discussion, representatives of the Shanghai Film Studio first introduced the market-oriented film production process to our teachers. Then, Chief Accountant Zhang Jiachun, on behalf of the visiting teachers from the Shanghai Theatre Academy, expressed her sincere thanks to the leader and relevant staff of the Film and Television Base for their warm reception. Finally, the leader of the Chedun Film and Television Base concluded the discussion with the remark "perceptual co-construction and rational cooperation", expressing their welcome to the Shanghai Theatre Academy and their expectation for further cooperation.

This Party Day them activity was jointly organized by relevant CPC branches, and explored the mode of "going out". It was a vivid and effective activity in association with the actual work of the Continuing Education and the Finance Department, and was actively responded and partaken by the Party members.